Tough day today - it our wedding anniversary and we are apart

Yes, I appreciate how great Gwen is to allow me to stay with my friends (and luckily to see a World Cup Final), but I still miss her...

It going to be another hot day, so again, Jerry and I are out early. Up to La Croix-Rousse (the Red Cross) area (we never saw the red/brown stone cross that the area is named after). The main attraction is the Le Mur Des Canuts (which was pretty awesome). Note that is is a plain/flat side of a building (if you can't tell). We couldn't help but be goofy tourists. 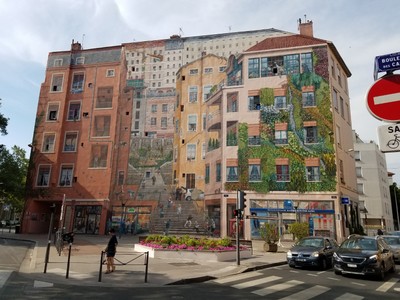 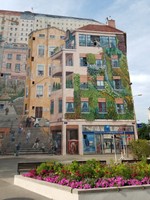 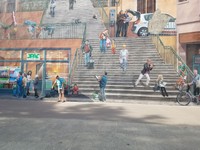 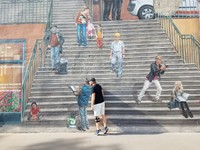 We (well, me) had understand that there were lots of murals in the area, but after only seeing a glimpse of one other that we couldn't really get to (inside an isolated square), google reveals that the various murals and frescos are really scattered all over the town of Lyon, not really concentrated anywhere in particular - in fact, we saw one in our own neighborhood later on. 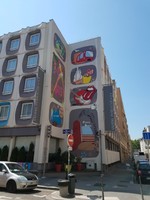 The Red Cross area was bustling with outside markets, stairs and hilly, up/down terain and some scenic views. We are at the cross-over time when it is difficult to find food - but even difficult to get waited on at all. We finally gave up and just grab something from a pastry shop. Afterwards, we just went back to the old town area to stroll and bit and see a little more of it (and Jerry had some serious shopping to do). We found that the Saint Antoinie market is much bigger on Saturdays (pottery) and lots of cool shops in old town (candy flowers, glass art and liquors sold by the milliliter). We hit the Crock n' Roll for lunch. And tried the fan fest for shopping (which worked) as well as the local soccer club store. 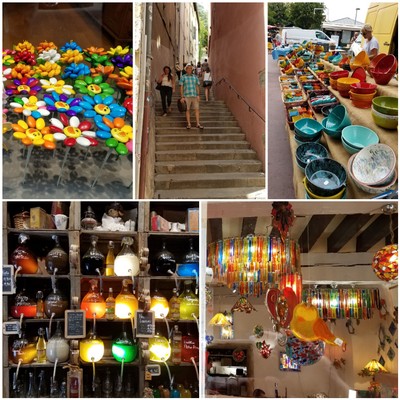 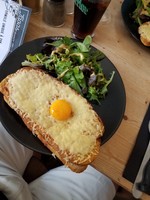 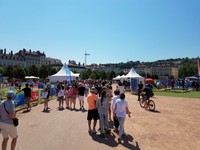 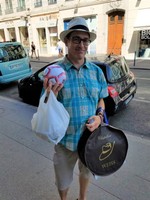 Ivan and Diana also spent the day eating and shopping - but unlike Jerry, they were not very successful - and even missed the Fan shop at the Fan Fest

Tonight there is a special party for US fans that we were invited to at 7pm. Unfortunately, I would not escape my turn at falling ill (and it didn't sound great to me, tomorrow it the final and no wifey) - so I skipped. I heard that it was a neat enough Disco but with high prices ($12 beers). 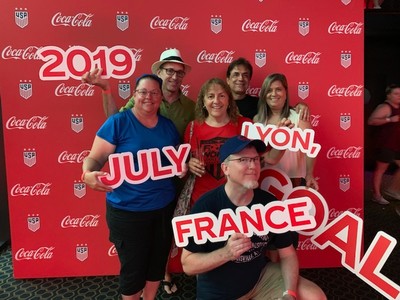 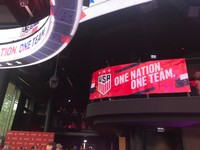 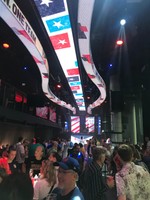 Phil, Kate, Ivan and Diana text me that they were going for dinner about 2 hours later, so I wasn't regretting the decision not to go (and hard to believe that Jerry and Sally would disco Ivan and Diana off the floor). Might not have gone to eat, but it was Pho, so I thought that might be good. I guess we passed around a stomach bug or something (although many blamed it on the food - hard to imagine it being passed around on different, subsequent days...) The pho was good even though they didn't have vegan or chicken, only beef or seafood... And I passed on the crazy, but interesting looking drinks. 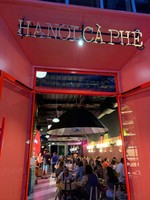 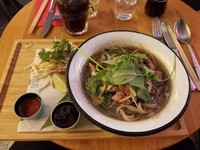 Off to bed for me, trying to get well for the cup tomorrow...

Previous Next Table of contents

Comments on this blog entry are now closed to non-Travellerspoint members. You can still leave a comment if you are a member of Travellerspoint.

If you aren't a member of Travellerspoint yet, you can join for free.